I’m a self-confessed keyboard nerd and got a hold of this keyboard for the keycaps off of a friend. Initially I’d thought they would be cherry compatible, but unfortunately, they are not. So rather than butchering a perfectly good keyboard, I wanted to make it USB compatible. Please bear with me, this is the first time I’ve done any projects interfacing with unknown hardware, or even with an Arduino. 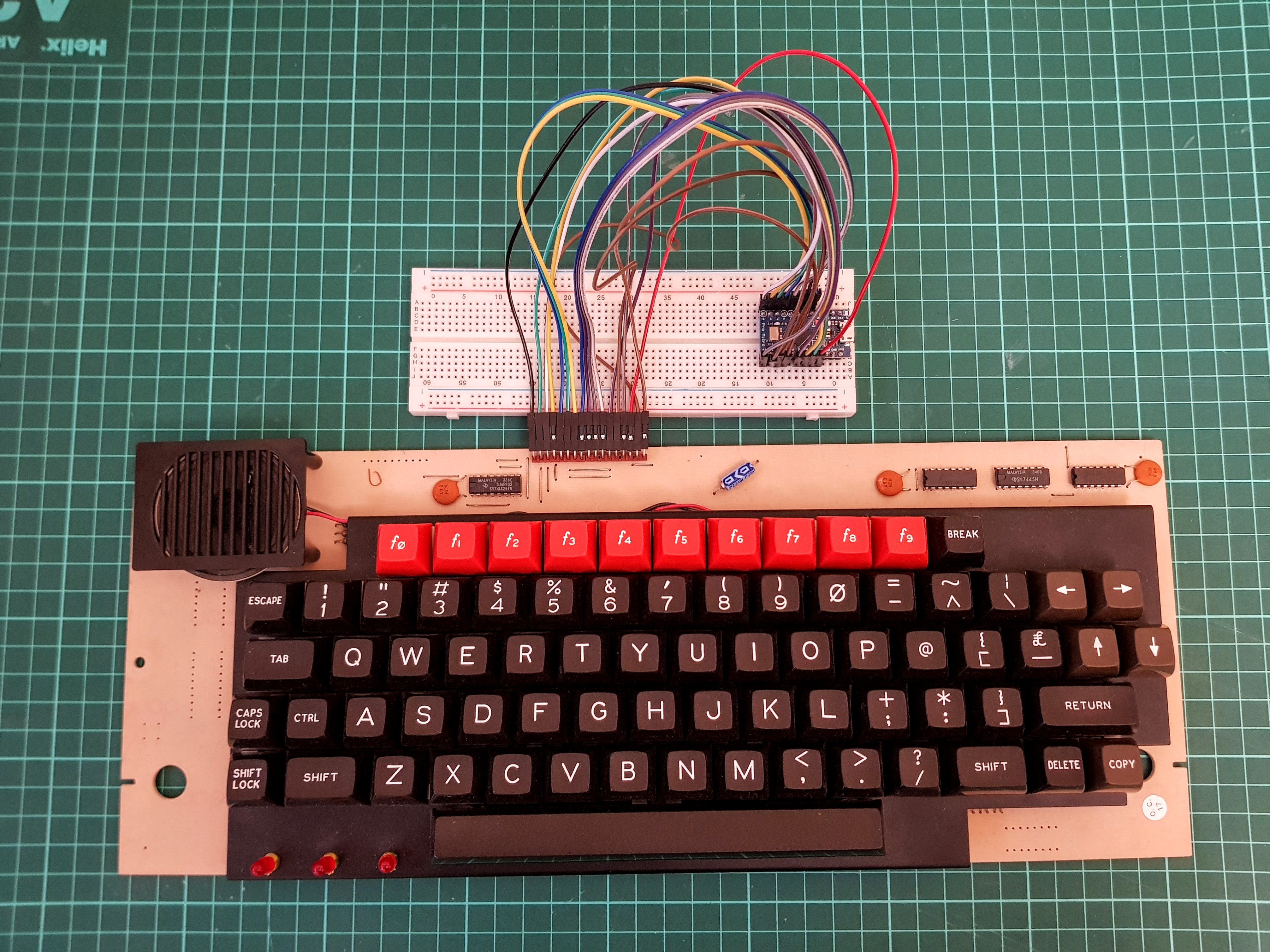 Here’s the GitHub repository for the current code, and all the circuit diagrams I could find. There are a few issues with the layouts of each of those, however:

The ATmega32U4 was chosen for a few reasons:

These were collected online from various sources, the first of two contains more information, the second is more basic and easier to understand at a glance.

Note that the rows are organised differently in the two diagrams and there is some disagreement between the locations of “I” and “9”.

The keyboard has some integrated logic on board, but as a basic breakdown a few things happen (as if it was still in the main box):

There is one exception, which is the break key that is a directly wired switch, that avoids the logic designed to perform soft/hard resets of the BBC micro.

There is a more detailed explanation of the whole system and keyboard available here.

Pin mappings for the BBC are from the top left to right, with the keyboard face up with the pins facing away.

So there are a few things we need to do here; generate a clock, listen for a keypress, scan the keyboard matrix, find out when we have the right combination of rol and col, and finally convert the (row, col) value to the correct character.

First thing’s first, supply the keyboard with ~5v from the VCC pin and generate a 1MHz clock on pin 9.

Put simply, this enables the fast PWM mode on pin 9 for a 1MHz signal, further details can be found in section 14.8.3 of the ATMega manual.

The LEDs on the main motherboard are already powered and need to be connected to ground to get to work. Setting the LED pins to output mode, and using the digitalWrite function to turn them on (LOW) and off (HIGH). Currently, the LEDs are mapped in the code to display keypress events and when the correct key has been found from scanning the rows and columns.

Early on, it became clear that the digital read mode on the Arduino would not be suitable as it uses a +5v signal for high, where the keyboard was returning +1.8-2.2v for high. So to compensate, an auto-adjusting sensor for each of the input pins using the analogue input.

Each input pin was set to an AnalogInput mode and checked every cycle. The low value was stored as it would drift. To ignore the drifting and nose on the pin, a threshold was added to ensure the readings for high were not false positives.

To encode this information, set the lines you want to count with to digitalWrite(high) and then check to see if W has gone high, indicating that you have found the correct row & col value.

Arduino as a keyboard

Arduino has a great (but limited) keyboard library, that I’ve used here to turn the device into a USB keyboard.

It allows the device to send ASCII characters in the same way a keyboard would. It can be sent as a quoted character, ASCII binary, base 10 or hexadecimal.

The next step is to map out the keyboard matrix into numerical matrices with the ASCII characters for three states: lower case, upper case and shifted. Once we have the correct mappings for these, they are converted to the integer values in ASCII using this very helpful tool.

The negative numbers are not valid ASCII characters and are used to represent special cases:

In order to get the key mapping to work, it is necessary to not send the data about the state of the shift key. This is done as I found that assumptions are made about the key mapping (at least on Linux), so “Shift + 3” is the “£” key on a UK layout, however, on the BBC KB this is the “#” character, so sending “Shift + 3” would print the “£” character.

So send “#” and problem solved, right? Well, no. Even though the correct ASCII code for “#” would be sent, as the shift key would also be held, the assumption is that it should be remapped this to the shifted version on a UK keyboard which is “~”.

So in order to send the correct characters, I had to withhold the shift status and store it locally on the Arduino to modify the keypress.

After scouring over the circuit diagrams, I had assumed that the layout of the rows and columns would be in a logical order. However, after a long and frustrating time, it appears that the layout of the rows does not follow my assumed logical mapping. After looking at it, this is clearly done to keep the trace layouts simple and efficient. (However, be wrong and just have some wires crossed.) The row order that works for me is :

Currently, my ‘Shift’ and ‘Ctrl’ buttons are not working. Unfortunately, it looks like the whole row of keys is out of commission. I’ll get back to this where I have more time, the rest of the row should be a row of selector switches, but this isn’t included on this keyboard model.

There are quite a few keys on this keyboard that are not in use anymore:

The break key is an interesting one and is wired independently to the keyboard. It is intended to be used to warm or cold restart the machine. I’m currently thinking I should map this and the ‘Copy’ key to “Ctrl + c”.

Shift lock has been implemented, by storing the value on the Arduino and passing the appropriate shifted ASCII code. F0 has been mapped to F10.

Configuring Unbound on PfSense as a DNS Resolver to register DHCP hostnames on localdomain and using PiHole as a DNS Forwarder to perform network-wide ad-blocking.

Setting up a Greylog server for central logging with Ansible

Learning how to use Ansible through setting up a Graylog server for centralised syslogging.

Moving away from ZFS on root, and using it for the HDD array.

A workbook of migrating Proxmox to a new host for the first time.

Moving my docker containers to a new host at home.

Setting up a VLAN with PfSence

A quick introduction to setting up VLANs with PfSence for a guest network.

How to simulate MR metabolite spectra with PyGamma, including binning and plotting.